ROUNDTABLE ON THE RUKUNEGARA

The Rukunegara was first announced by Yang di-Pertuan Agong Tuanku Ismail Nasiruddin Shah Ibni Al-Marhum Sultan Zainal Abidin in Kuala Lumpur on Merdeka Day 1970 as a unifying healing factor for the country after the bloody May 13, 1969.
Since its conception, the Rukunegara is viewed as the national ideology or philosophy in charting the path towards national unity. Over the years, the Rukunegara has appeared with varying degrees of visibility and significance in the public eye, but mostly on a superficial level. Its deeper understanding
remains lost.

Recently the government has proposed in conjunction with the 50th anniversary of the proclamation of the Rukunegara to incorporate elements of the national philosophy in the events and activities of the 2020 National Day celebration. Attempts will be made to inculcate every Malaysian with an appreciation of, and a commitment to, the Rukunegara. As a long- term plan, Rukunegara education will be implemented in schools, universities and other organisations.

Fifty years on, with inter-ethnic relations being continuously challenged by people’s differing political affiliations and loyalties, it is more urgent than ever to remind Malaysians to inculcate the unifying values of the Rukunegara in their daily lives.
While a deeper understanding of the Rukunegara would be most useful, what really matters is the actual application of its aspirations and principles. Society as a whole — and not just the government of the day —- should assess and evaluate the implementation the Rukunegara. It is our failure to assess critically and honestly the implementation of our lofty aspirations and principles that often results in a huge gap between a nation’s ideals and its realities.

This Roundtable will debate to what extent have we lived up to the principles of the Rukunegara? How effective has Rukunegara been vis-à-vis national unity? How much have we achieved in our journey towards national unity? in our move towards a progressive society orientated towards science and technology, will the Rukunegara remains relevant? What are the different ways we can create awareness and interest among the people at various levels of society, especially students in schools and institutions of learning to inculcate the values espoused in the Rukunegara? 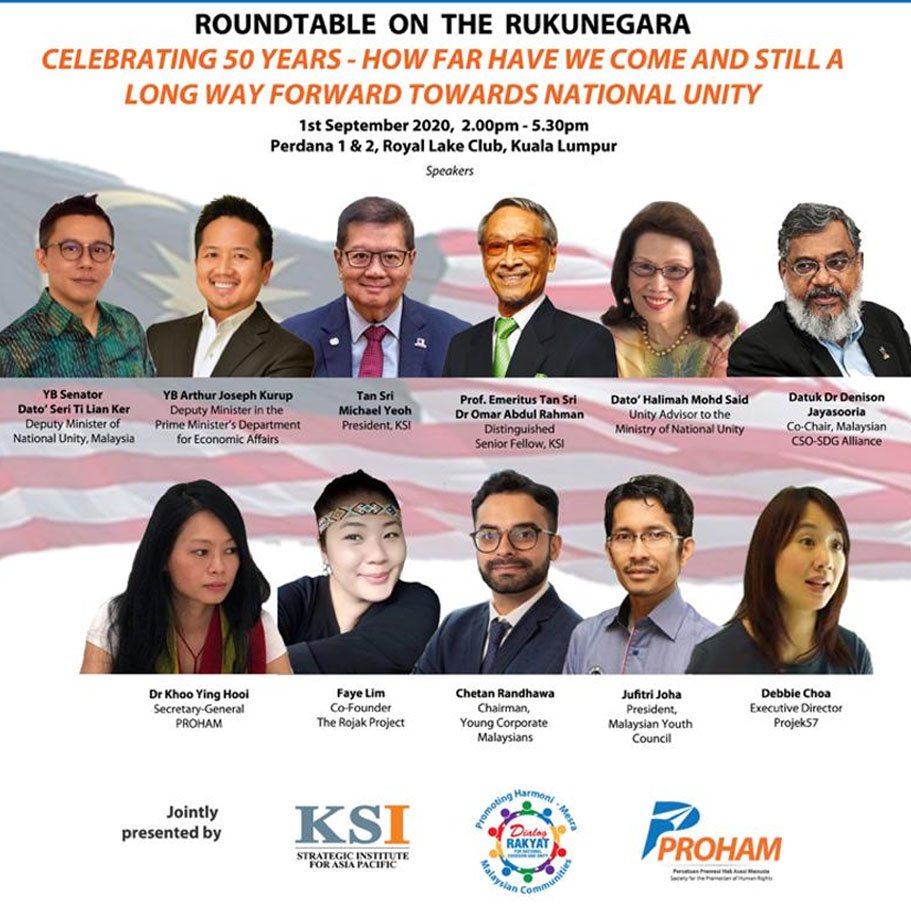 For further enquiries or registration please email to
registration@kasi.asia