The Steadfast Need for Conventional Banking in the Midst of Digitalisation

KUALA LUMPUR – KSI Strategic Institute for Asia Pacific organised the 2020 Malaysian Banking and Finance High-Level Meeting and Virtual Conference on 23rd July 2020. The conference focused on the effects of digitalisation on the banking and finance industry.

YB Dato’ Sri Mustapa bin Mohamed, Minister in the Prime Minister’s Department for Economic Affairs was present at the conference to deliver the Opening Keynote Address. He spoke passionately of the efforts of the Economic Action Council (EAC) in remedying the negative effects brought by the COVID-19 pandemic. He also spoke of the efforts undertaken to improve Malaysia’s business competitiveness by removing red tape and addressing regulatory issues. The minister also spoke of  labour mismatch issues and highlight the Malaysian government’s move to reduce dependence on foreign labour.

Four sessions took place during the conference by prominent speakers from the banking and finance industry. Speakers pointed out shifts in the banking landscape as Malaysian glove makers have more market capitalisation compared to many Malaysian banks. Tech companies in the likes of Apple, Amazon, Facebook, and even Grab and Gojek are providing financial solutions and are beginning to disintermediate traditional banks. Crowdfunding platforms have also become an alternative source of financing. Excitements over P2P lending has lost steam due to numerous cases of fraud. While there is still much interest in digital banks with their numbers increasing, very few have been profitable. Confidence remains with the traditional and conventional form of banking as they are able to employ a “boots-on-ground” approach which remains a fundamental necessity to verify customers background. However, the traditional brick-and-mortar with counters, automated teller machines, and bank branches will reduce overtime. Conventional banks will increasingly partner with financial technology companies – the fintechs, to develop the best products for the benefit of their clients. At the same time, bankers need to reskill and upskill to perform higher-value jobs, instead of resisting change and risking unemployment. While changes in technology are happening frequently, banks must not make the mistake of wanting to involve themselves in all forms of technology but instead discern wisely on which types of technological solutions they need.

The conference also saw discussions involving the crucial need to emphasise the sustainability agenda in areas covering the environment, social, and governance (ESG). Banks cannot solely be profit-driven and must also include strategies to promote sustainable operations and practices, not only amongst their own, but also inducing their clients to do the same. Incentives such as green sukuks, preferential interest rates, and tax rebates can be offered by regulatory bodies and the government to encourage banks and more companies to take on ESG initiatives.

Discussions also took place focusing on the unbanked, which not only involve individuals without bank accounts who were caught out by the digital divide but even include those with bank accounts who have not utilised them effectively. The lack of digital literacy alongside the lack of financial education has put the aged and vulnerable groups at a disadvantage to fraud. Those without bank accounts have also been unable to access government assistance programmes, crucial in light of the COVID-19 pandemic for survival. Other forms of assessment need to be explored to help the unbanked be part of the financial system. 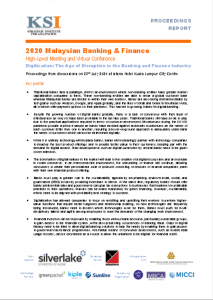