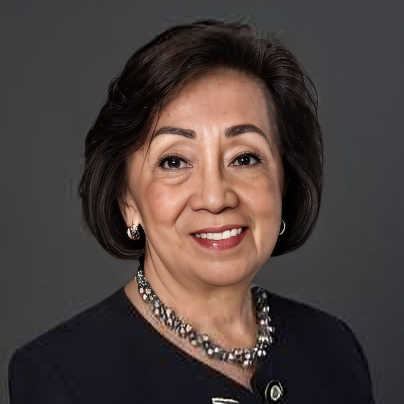 Ambassador Delia D. Albert is the first woman career diplomat to become Secretary (Minister) of Foreign Affairs in Asia. She represented the Philippines in Switzerland, Romania, Hungary, the Federal Republic of Germany and the Commonwealth of Australia.

As Chair of the United Nations Security Council in 2004 she introduced the agenda “The Role of Civil Society in Post-Conflict Peacebuilding” highlighting the role of women as peace makers.

She attended the University of the Philippines, the Institute of International Studies in Geneva, the Diplomatic Institute in Salzburg, Boston University Overseas in Bonn, the J.F. Kennedy School of Government at Harvard University, among others.

The Philippine Women’s University conferred on her Doctor of Humanities, honoris causa for building a gender-fair society and was awarded “Most Distinguished Alumna of the University of the Philippines in 2012.

For her meritorious and exceptional service to the country she was conferred the Presidential Order of Sikatuna rank of Datu. In 2004 she was given the title of “Bai-A-Rawatun sa Pilimpinas” for assisting Muslim women in their search for peace and development. She received the Knight’s Commander’s Cross of the Order of Merit with Star (BundesVerdienstKreuz) from the Federal Republic of Germany and the single award to celebrate 70 years of Philippine-Australia relations from the Australian government. In 2019 she was conferred with the Order of the Rising Sun Gold and Silver Star by the Government of Japan.

Ambassador Albert is a member of the advisory board of the Institute for Cultural Diplomacy in Berlin; and the Global Summit of Women. She is the founding chair of Business and Professional Women Philippines (Makati Chapter) Diwata: Women in Resource Development, ASEAN Society-Philippines; adviser to the Filipina CEOs Circle; and the author of “Women in Diplomacy: The Remarkable Ambassadors in the Philippine Foreign Service”.