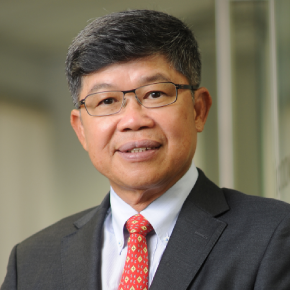 GOH PENG OOI is the Founder and Chairman of Silverlake Group.  He has been working on mathematical and digital sciences since 1977.

He graduated with a Bachelor of Engineering majoring in Electronics Engineering on a Monbusho scholarship at the University of Tokyo, he began his career in IBM Malaysia.

In 1989, he founded the Silverlake group and today, the group is a multibillion-dollar organisation with key offices around the globe with some of its member companies listed on various stock exchanges.

The group’s original tagline, ‘Symmetry at Work’, was recently revised to ‘Symmetry at Work Powering Hundreds of Deep Tech and New Tech Companies’, reflecting both the Demand and Supply sides of Economy.

The Silverlake group has a core staff force of more than 2,500 worldwide, excluding that of its associated and related companies, supporting over 380 large customers who are located in over 100 countries across all continents. The group has earned many industry recognitions since its inception including Forbes’ Best Under A Billion – Best of the Best (2013), The Asian Banker Vendor Satisfaction Survey Gold Award (2014), Forbes’ Best Under A Billion (2015).

In recognition of his professional contributions, Goh has received numerous awards such as Ernst & Young Entrepreneur of the Year Award Malaysia – Technology Entrepreneur (2005) and Master Technology Entrepreneur (2014); The World Chinese Economic Summit Lifetime Achievement Award (2015); ASEAN Legacy Award (2017); and most recently in 2019 Goh was the sole recipient of the ASEAN Entrepreneur of the Year Award.  In 2015 Forbes referred to Goh as the first tech-billionaire in Malaysia. Personally, Goh was conferred a fellowship by the Academy of Sciences Malaysia. He also has roles of advisor, governor and member in various universities and organisations.