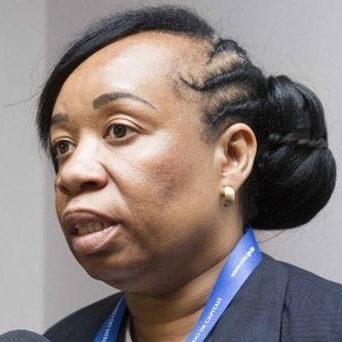 Secretary of State for the Family and Promotion of Women, Ministry of Social, Action, Family, and Women’s Promotion, Angola

H.E. Elsa Maria Barber Dias dos Santos was born in Luanda/Angola, has a law degree from the Agostinho Neto University and a post-graduate degree in law and business management.

At a professional level, she was Director of the National Institute for Consumer Protection, General Inspector of the Ministry of Commerce, Director of the Financial Literacy Office of the Capital Market Commission, Deputy Director of the Currency Museum of the National Bank of Angola, Director for Political and Electoral Affairs of the MPLA, the largest political force in Angola, and is currently Secretary of State for Family and Women’s Promotion, therefore a member of the Angolan
Executive.

She participated in the Twelfth Session of the United Nations OpenEnded Working Group on Aging in 2022, participated in the General Conference of UNESCO in 2021 and in several world forums that address women’s issues, where we highlight the following themes.
Women, Peace and Security, Gender Equality and Equity, Gender-Based Violence, Family Competence, Child Protection, Persons with Disabilities and the Elderly, and Social Inclusion.

She has published the following works: