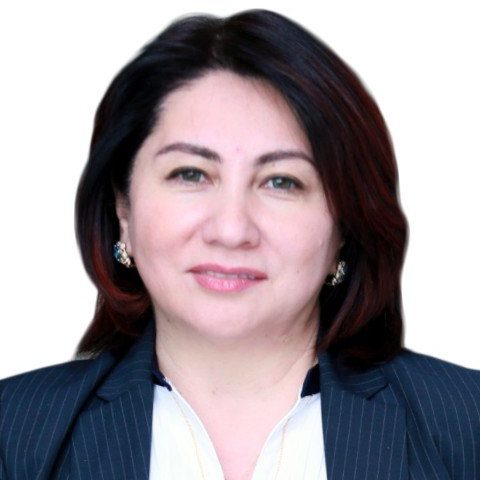 Founder, Chair of the Board, National Association of Business Women of Tajikistan (NABWT)

Over 25 years of professional experience in community mobilization and social development work, with a focus on young people, poverty reduction, and women’s economic empowerment and financial inclusion. Founder, CEO, and later Board Chair of the NATIONAL ASSOCIATION OF BUSINESS WOMEN OF TAJIKISTAN, one of the first non-profit membership organizations in Tajikistan, uniting more than 3500 women entrepreneurs.

Has over 20 years of experience in financial services for the poor. As a co-founder and First Deputy CEO, and later CEO of IMON International, she spearheaded the establishment and development of institutional infrastructure, built up company network from a single office to 110 service points, including 27 branch offices, with 2000 professional and dedicated staff, more than 120 mln dollars in assets.

In 2005, she attended Khujand State University for Master’s degree in Finance and Banking. Later she got her Ph.D. in Gender and Science in the Institute of History, Archeology, and Ethnography of Academy of Sciences of the Republic of Tajikistan. In 2015, she received her Master’s degree in Business Administration (MBA) from Steinbeis-Hochschule Berlin, Germany.

She is the author and organizer of the “Woman Entrepreneur of the Year – FARAH Award” a national contest conducted biannually since 2012.
She is the author of the “April Readings”, a project dedicated to open lectures on Gender Education for University teachers.

She is the author of more than 30 publications and three monographs, and a participant of numerous international conferences on gender agenda.
In May 2014, she won the EBRD Women Business Awards for “Outstanding Achievement in the Financial Sector”, for her role as the Deputy General Director of the IMON International. She was also mentioned as a Role Model in FMO.