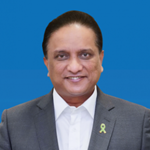 YB DATO’ SRI REEZAL MERICAN NAINA MERICAN  is a Malaysian politician serving as the Minister of Housing and Local Government in the Barisan Nasional (BN) administration under Prime Minister Ismail Sabri Yaakob since August 2021. He served as the Minister of Youth and Sports in the Perikatan Nasional (PN) administration under former Prime Minister Muhyiddin Yassin from March 2020 to August 2021. He has been the Member of Parliament (MP) for Kepala Batas since May 2013 after the retirement of 5th and former Prime Minister Abdullah Ahmad Badawi as the MP from politics. He is also a member of the Supreme Council of the United Malays National Organisation (UMNO). He is an ethnic Malay of mixed Indian descent.