Human rights have returned as a major agenda for Malaysia’s foreign policy with implications for its domestic policies. As Malaysia seeks a place as a member of the United Nations Human Rights Council (UNHRC) for the 2022-2024 term, it has released a set of voluntary pledges and commitments. Here, Malaysia made promises to the Office of the United Nations High Commissioner for Human Rights (OHCHR) towards the commitment of human rights domestically as well as globally. On 31st December 2020, Malaysia joined another 105 countries to sign the UN General Assembly resolution for the total elimination of racism, racial discrimination, xenophobia, and related intolerance, and the comprehensive implementation of and follow-up to the Durban Declaration. Malaysia has also issued its Voluntary National Review (VNR) during a United Nations (UN) high-level political forum on the SDGs. Among those under review is SDG 16 on Peace, Justice, and Inclusive Societies. Another related development is the launch of a new publication by Professor Datuk Dr. Denison Jayasooria, Understanding ICERD in the Wider Context of the Federal Constitution, Human Rights, and Malaysian Society at the Human Rights 365 Group meeting which was hosted by UN Malaysia’s country team and KITA-UKM. With a high foreign policy reference to human rights, building inclusive societies in preserving national unity, Malaysia must review its human rights commitments with a special focus on addressing racism both domestically and globally.

Malaysia is at a crucial juncture in history where there is a need for greater unity and respect for human rights that need to be better protected. The Federal Constitution must be respected and upheld to facilitate national unity. Public policy for national unity should be crafted from a human rights dimension. Human rights should be mainstreamed in public policy and in upholding national unity in Malaysia. Malaysia needs to live up to its international obligations. PROHAM calls upon the Malaysian government to ratify all the United Nations human rights conventions, such as the International Convention on the Elimination of All Forms of Racial Discrimination (ICERD). 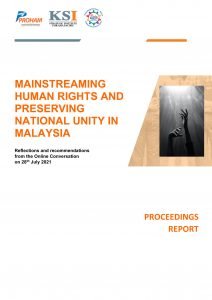