Background
The Sabah International Business and Economic Summit 2022 (SIBES) was a Sabah-state government sponsored conference that took place on 17-18th January 2022. It brought together stakeholders from the state government, private sector and civil society to discuss and ideate the future of Sabah’s economy. The Sabah state government under the leadership of YAB Datuk Seri Panglima Hajiji Noor has launched the Sabah Maju Jaya (SMJ) Development Plan 2021-2025 in March 2021. In reviewing and proposing fresh ideas to build on the blueprint, the Summit was a gathering of government leaders, captains of industries, academic experts, and investors with the aim of promoting discourse on building an inclusive, sustainable and innovative Sabah economy.

Report Summary
The Sabah State Government aspires to revitalise the state’s economy through the Sabah Maju Jaya Vision 2025 plan by stimulating its various sectors, bringing in substantial investments, and committing to infrastructure development. There is great potential in Sabah as its economy is expected to grow at a positive rate of 3.8-4 percent in 2022.

In 2021, Sabah recorded its highest-ever state revenue surpassing MYR5 billion for the year. With its geographical advantage, Sabah is able to leverage the various trade agreements Malaysia is part of such as AFTA and RCEP. It is also in the best location to access large markets of the countries under BIMP-EAGA due to its proximity. Sabah can reposition itself as a manufacturing hub and producer of goods as it is currently dependent on imports. Achieving this requires improved interconnectivity with upgraded facilities for container ports, logistic hubs, air access, and other infrastructure means that enhance the movement of people and material. Opportunities can be found in the digital agenda. Sabah can become a data hub that offers services from data management to integration. With upcoming initiatives such as E-ID and other smart applications intended to improve processes, a more aggressive push is needed to digitalise.

To facilitate this, Sabah needs clear institutional structures to oversee matters involving ICT activities in the state. Other niche areas can be focused on, such as the biopharmaceutical and biomedical wellness industry, agriculture, tourism, and timber industries. Sabah’s government is keen to partner with more investors, both foreign and domestic. However, systematic issues need to be addressed to attract and facilitate trade and business into the state. Labour-related regulations and policies involving immigration need to be eased. Approval processes have to be sped up and the cost of doing business needs to be reduced. Incentives can be introduced for factory relocation, especially from Peninsula Malaysia, besides enhancing basic infrastructure and enablers in the economy. The State Government can also pursue sub-sovereign ratings that will enhance Sabah’s credibility, transparency, and disclosure as accorded by the rating, allowing investors to gauge the state’s credits more accurately and enable Sabah to raise finances from the international capital market.

Sabah is improving its sustainability efforts, particularly with forestry. With controversies surrounding palm oil, active steps have been taken to conserve their existing forest while allowing sustainable forms of logging through replanting and industrial tree plantations (ITP). Having priorities on the sustainability agenda by adopting best practices, such as the ESGs, would save Sabah from the need to implement them at a later time when the world would insist on such standards. Sabah’s inequitable issues with the Federal Government in terms of economic development when it comes to matters of funding need to be resolved. This includes matters such as inequitable share of revenue, budget allocation, insufficient approval power in administrative issues from the Federal Government, and the lack of tailored made tax incentives for Sabah. The revitalisation of Sabah’s economy also requires a change in attitude amongst the people of Sabah whereby Sabahans need to develop a work ethic with a greater sense of urgency. 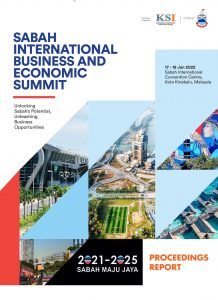